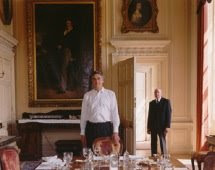 Here is your chance to hear Tina Barney and maybe even ask a few questions. Below is the press release.
As part of the ongoing lecture series hosted by Aperture and presented by the Department of Photography, Parsons The New School for Design, Tina Barney will show and discuss her work. Since 1975, Barney has been producing large-scale photographs of family and friends, many of whom belong to the social elite of New York and New England. Working with a large format camera, Barney became one of the first artists working in the 1980s to carefully stage her photographs. Barney's subjects are often seen in complex photographic compositions that invite intimate study of the behavior, social class, and notions of privilege suggested by the clothing, picturesque environments, and luxurious settings they inhabit. Barney explains the coolness of the relationships depicted in her work: "When people say that there is a distance, a stiffness in my photographs, that the people look like they do not connect, my answer is, that this is the best we can do. This inability to show physical affection is our heritage."

Tina Barney (b.1945, New York City) has widely exhibited her work in galleries and museums around the world and is held in numerous collections including the Museum of Modern Art in New York; the Museum of Fine Arts in Houston; the San Francisco Museum of Modern Art and the Museum of Contemporary Photography at Columbia College in Chicago. Barney's photographs have appeared in the acclaimed books Tina Barney: Theater of Manners (Scalo, 1997), and in The Europeans (Steidl, 2005). She is represented by Janet Borden, Inc., New York.