Edward Ranney at the Albuquerque Museum

In 1978, Ed Ranney began working collaboratively with Charles Ross to photograph the creation of Ross’ earthwork sculpture, Star Axis. Ranney annually photographs Star Axis, a celestial observatory near Las Vegas, New Mexico. Standing eleven stories high and measuring 1/10th of a mile across, this sculpture places viewers inside the trajectory of the earth’s axis. Both Ranney and Ross will talk about their years of collaboration around the project.

The talk takes place on Sunday, August 30 at 1pm at The Albuquerque Museum

About the show:
Edward Ranney has photographed the growth of the earth-sculpture Star Axis since 1979, when Charles Ross began excavation of the southern edge of Chupinas Mesa, near Las Vegas, New Mexico, for the construction of the site’s eleven story Star Tunnel. The large-format photographs Ranney has taken each year since then reveal a major site growing out of its own rubble. For Ranney, with his extensive experience photographing pre-Columbian sites of ancient America, this process might be described as a kind of visual archaeology in reverse. Inherent in a project spanning a generation are visual observations of the power of a specific site as it grows and changes over time, as well as a poetic sense of the changing shape of time itself. Here photographic documentation speaks not only of architectural construction, but also of process and duration, intuition and aspiration, and a shared desire to understand cosmic phenomena on a human scale. 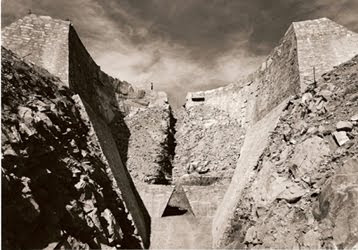