In the last year or so I have come across a few artists who have put together a body of work that really intrigues me and Claire Beckett’s work is near the top of that list. I was ecstatic when Claire agreed to answer some questions for me about her series Simulating Iraq. I would like to thank Claire for taking the time to answer my questions and to Fraction and David for posting the interview.


JS: How did you get into photography?

CB: I started making pictures while in high school. As a kid I was always into art, and I’d been pretty seriously dedicated to pottery. Then in the 11th grade my pottery teacher, whom I was very fond of, retired and I refused to study with the new one. In need of an art class, I ended up taking photography with the attitude, “I’ll hate this, it’s not me.” But I ended up loving photography from the very first day. I have been making pictures ever since.

JS: How important is your camera equipment to you? Do you consider yourself a gear junkie or not?

CB: The gear is only important to me so far as it enables me to make the picture I want. So for my current project I want a large, focused negative that I can enlarge to a decent size. Compared to other photographers I think I’m not that into gear. Gear in of itself does not interest me all that much—what I want is a really great picture. 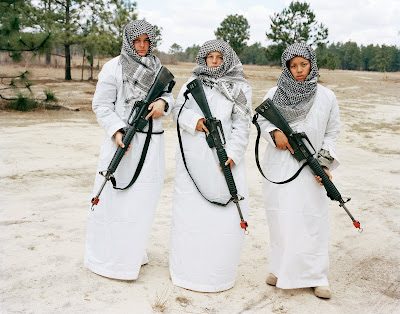 
JS: What is the impetus behind the photographs in your latest series Simulating Iraq?

CB: Prior to working on “Simulating Iraq” I did a project called “In Training,” in which I dealt with young soldiers preparing for war. “Simulating Iraq” sprung directly from my experience photographing soldiers in training. One day I saw a bunch of Basic Training soldiers dressed up like Iraqis and made this picture “Privates Kendra Duffy, Allison Bronner and Jessica-Ann Layug, playing the role of Iraqi civilians during Basic Training, Fort Jackson, SC, 2006.” (see my website under “In Training”) Afterwards I did some research and learned that cultural role playing was becoming a major component of pre-deployment training, and so I pursued the opportunity to photograph at several specialized facilities. Personally I am very interested in the concepts of cross-cultural interaction and role-playing, and these interests stem in large part from my undergraduate training in Cultural Anthropology and my experiences working as a Peace Corps Volunteer in Benin, West Africa.


JS: I've noticed as I look through the series that it plays back and forth between photos that seem very quiet and some that seem very shocking. Could you explain the importance of this, if any, in this series?

CB: Yes, you’re absolutely right. With the Simulating Iraq series I move between quiet, contemplative photographs and more jarring ones. This interplay is important to me. I think of some of the calmer landscapes as setting the scenery or providing the context for the more forceful pictures. If I had a whole wall of the bloody pictures, for example, I think it would really be too much. Mixing the pictures together I think a viewer has a better chance to enter the work and spend some time with it.

JS: How do you find the locations you shoot in?

CB: I do a lot of research before ever going out to photograph. I discover places to photograph through a combination of secondary research and speaking with my contacts in the military. Often I’ll hear about something in the news and then call someone I’ve worked with in the past to get more information about the logistics of photographing at the site and also get more information about the look of the place, which is hugely important to the photography.

JS: How many photos do not make it into your final series of images you show?

CB: Many photos do not make it into the final edit. I don’t edit myself when I shoot. I prefer to make many photographs and edit down in the printing stage. 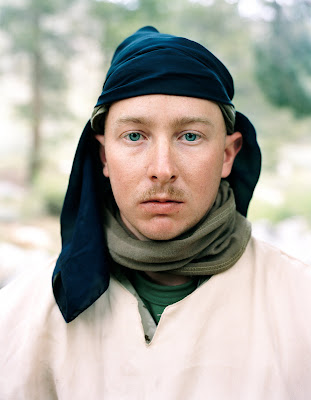 JS: How much of a directorial influence do you exert over your portraits?

JS: How do you begin a new project and when is a project or a body of work finished for you?

CB: I begin a new project when a new idea starts nagging at me and won’t let me be. If the idea doesn’t really stick around and bug me then it probably isn’t a good idea. Likewise a project is finished when it isn’t exciting me anymore. I usually try to make some more photographs just to be sure.

JS: What does the future hold for this project?

CB: At this moment I’m in the editing stage, so I’m not sure. I’ll know once I’m done printing and editing my newest photographs.


JS: How do you get over a creative slump in your work?

CB: I try not to indulge in too much negative thought about a creative block. Instead, there is always something to be done to move the work forward, whether that is shooting pictures, editing, printing, sharing proofs, drafting an artist statement, reading, doing research, revising the website, etc. If I don’t exactly know what to do next I work on whatever is in front of me. I don’t regard not knowing what to do next as a problem, rather I tend to see it as an opportunity for the next thing to present itself to me organically.