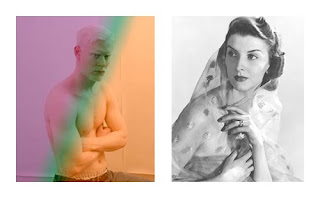 Still Life examines a tendency in contemporary portraiture to remove the subjectivity of the persons photographed, literally transforming them into objects. The artists depict people as matter rendered through light and color, with emphasis placed on their formal or cultural qualities above all others. The exhibition juxtaposes this contemporary work with studio portraits from the Camera Club Archives, fostering a discussion about the relationship between classical idealized studio portraiture and contemporary critical portraiture.

With their bust portraits, Lyndsy Welgos and Ann Woo turn their subjects into nothing more than swatches of light color and gray tonality, and engage little with their individual identities. While their subjects are nude, the images are less about their personal sexuality or vulnerability and more about their physical surface. Michael Bühler-Rose’s portraits cast western women who were raised in India, as cultural objects. Unlike Woo and Welgos’ stark socially removed explorations of light and form, the women in Bühler-Rose’s pictures contain heavy social and cultural signifiers, as the women are adorned with various elements of eastern and western culture. They display heavily directed gestures and costuming and pay homage to orientalist painting, but we know little about their identity below the surface cues.

Erica Allen’s Untitled Gentlemen uses anonymous faces from found barbershop portraits to explore representations of identity. Appropriated and repositioned, the actual identities of the men remain as lost as they are on the walls of barbershops. The portraits comment on larger issues of gender while avoiding any appearance of personal identity or inner dialogue. Lastly, Robyn Cumming’s work addresses these ideas on the most direct level as she photographs women fused with flowers and other symbols of femininity, literally turning them into objects.