PDN Photo of the Day !

My photograph, Black Church, Budir Iceland, is the PDN Photo of the Day.
Check it out!
(ps... 8x10 silver gelatin prints are available for sale for $100 including shipping)
at 1:06 PM 1 comment:

Email ThisBlogThis!Share to TwitterShare to FacebookShare to Pinterest
Labels: pdn

Thursday, April 22
Lecture by David Taylor
7 p.m.
Arnold Hall, 1810 Bull St.
David Taylor’s photo constructions, multimedia installations and artist’s books have been exhibited extensively in group and solo exhibitions and is in multiple permanent collections. In 2004 he was awarded a major public commission by the U.S. General Services Administration for artwork to be installed in a new federal courthouse to be built in Las Cruces, New Mexico, with an anticipated completion date of 2010. Previous awards include commission to produce artwork for a newly constructed U.S. Border Patrol Station in Van Horn, Texas; a residency from the Nexus Press at the Atlanta Center for Contemporary Art; and a private commission for the El Paso law firm of Ryan and Sanders LLP. Taylor’s ongoing examination of the U.S./Mexico border is supported by a 2008 fellowship from the John Simon Guggenheim Memorial Foundation.

Professional panel
1-2 p.m., River Club
Gain practical advice for fine art promotion and networking from the perspective of established professionals. Panelists include:
-- David Bram, photographer, curator and editor of Fraction magazine
-- Patricia Hamilton, private art dealer, curator and artist’s agent based in Los Angeles, as well as the former owner and director of Hamilton Contemporary Art in New York
-- Karen Irvine, curator at the Museum of Contemporary Photography (MOCP) in Chicago
-- Paula Tognarelli, photographer and executive director of the Griffin Museum of Photography in Winchester, Mass.
-- Natalie Zelt, curatorial assistant for photography at the Museum of Fine Arts, Houston

Email ThisBlogThis!Share to TwitterShare to FacebookShare to Pinterest
Labels: scad

Email ThisBlogThis!Share to TwitterShare to FacebookShare to Pinterest
Labels: eggleston

I just started reading this book last night and can already tell that not only am I going to enjoy it, but that it will have an effect on the type of work that I do.

I will do a short write up on the book when I am done with it.

In the meantime, do yourself a favor and buy it. 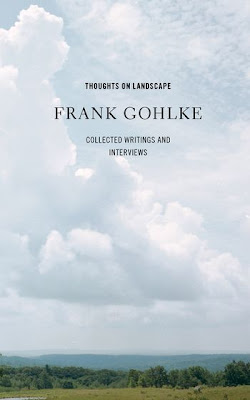 Email ThisBlogThis!Share to TwitterShare to FacebookShare to Pinterest
Labels: gohlke

Other than Twitter and Facebook, what social media are you using to promote your photography?
at 8:12 PM 6 comments:

The Verve Gallery, in Santa Fe, has just announced an iPhone app that showcases their gallery and their artists.  It is well done, easy to use and beautiful.  And it's free.

Email ThisBlogThis!Share to TwitterShare to FacebookShare to Pinterest
Labels: verve

I am really happy to announce that I will be a reviewer at this year's Review Santa Fe.  I consider it a great privilege to be part of this event.
Thank you to Laura Pressley and Jessica Taylor Watts-Parker for including me in this list of terrific reviewers.
at 2:45 PM No comments:

In the last couple of weeks, two photography events / competitions have been announced and both events have age limits;  one is 35 and the other is 40.

So tonights question is:

What do you think about age requirements in photography competitions?

Raymond Meeks has a new limited edition book and print

Raymond Meeks is offering up a new limited edition book and print.

“amwel | continuum” is an artist book/journal which advances the subtle narrative of my most recent artist broadside, “carousel”, while continuing to explore the construct of memory and resolve loss.  it’s only now in the completion of this book, that I recognize a sustained and underlying thread of melancholy, similar to a passing glance in the mirror on your way out the door that reflects the unseemly or the shock of hearing your voice in a recording.  for me, there are delicate moments of joy represented throughout this book,  as well as a kind measure of hope.  there are multiple pairings observed in the layout, perhaps to suggest a lingering in the landscape and to parallel my personal impulse to do so.  in addition, I’ve been compelled to experience and express time beyond chronological sequencing,  the absence of time in the horizontal dimension of past and future.
in the making of books, I’m drawn to the merging of contemporary materials and media with less common and impermanent results.  Nazraeli publisher and friend Chris Pichler has generously offered a broad format laser printer (weighing-in at a hulking 150 lbs.)  I suspect the machine lacks an “energy-star rating” and have found that by shutting down the lights and music and turning down the heat, I can successfully print books without short circuiting the power.  obviously, this limits my printing operation to daylight hours.  however, the printer allows for fine reproductions where toner sits on top of cotton fiber paper and is “fused” creating a wonderful merging of mediums. While my recent publishing efforts may have something to do with deconstructing the “art book” and shifting focus from the beautiful object to honoring content and subject, I am, as many, drawn to tactile experience and a clear expression of the work in book form; using inexpensive materials and common tools while subtracting nothing of quality or value from the piece.

finally, this new book format serves as a model for a bi-monthly journal which I hope to begin work on immediately.  the journal will be published in similar “zine” fashion with conscious attention to subject, content and narrative and will feature collaborations between myself and distinguished contemporary artists.  I hope to create a model and mode of interacting,  photographing and recording which removes my “self” in the service of a more universal genius or creative source.  perhaps, a lofty mission and one that will most certainly evolve, but an undertaking charged with spirited enthusiasm.
as always, I’m deeply grateful and humbled by the support of my generous friends and patrons.  thank you!


To buy the book and print, go to this page and use "friend" as the password 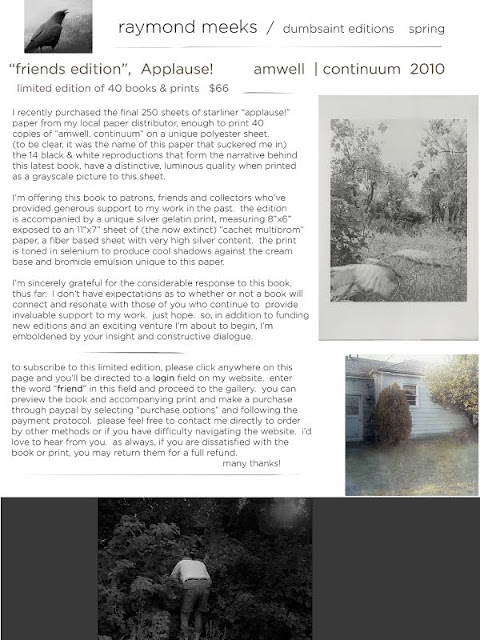 Jamey Stillings and The Bridge at Hoover Dam

It's been quite a year for Santa Fe, NM resident Jamey Stillings.

He started photographing the new amazing Bridge at Hoover Dam in March 2009. Just a few short months later, the work appeared in the New York Times Magazine in June 2009.  Then last fall he had a show at Photoeye.  This past March,  Jamey's project took first place for the Center Awards Editor's Choice.  And just now, the work has been featured on NPR's Picture Show.

Check out the website for the project here.  You can also see some of the work on Fraction.

I've had the pleasure of meeting Jamey and actually sat next to him on a flight home from Review LA.  He is incredibly passionate about this work and wants it to go to serious places. Also, I've have seen the photographs in person and they are stunning.

Jamey produced a little Magcloud magazine showing some of the photographs.  It's a terrific little 'zine and something that you should add to your collection.  Buy it here.

Congrats to Jamey and good luck with this project.
at 9:26 PM No comments:

This is a big deal.  Congrats to Yale.

Can't wait for the big show.  I will definitely make it there.
at 10:01 PM No comments:

Women in Photography and Daily Candy

From Daily Candy:
"Photographers Amy Elkins and Cara Phillips launched the online platform Women in Photographyin June 2008 as a forum to exhibit those emerging and established. (Male artists still far exceed their female counterparts in museum and gallery exhibitions.)


With that in mind, we asked Elkins and Phillips to curate a collection of images exclusively for DailyCandy. Take a look and cheer for the ladies"
Included in the exhibition are Holly Lynton (Issue 3) and Emily Shur (Issue 13)

See all the work here. 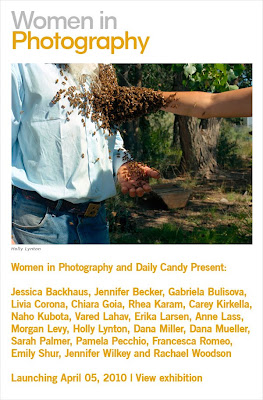 Reception for Thrills and Chills: Photographs by Isa Leshko Isa Leshko, who was featured in Issue 12, has an opening reception at the Griffin Museum.
at 8:45 AM 1 comment:

My good friend and fellow Albuquerque photographer, David Ondrik, has recreated his website and has a few new bodies of work to show as well as a new way to buy and collect his work.

Check out the new site at http://www.artisdead.net/ and be sure to click on the "collect" link.  The print below is the first one he is offering for sale via the new site. 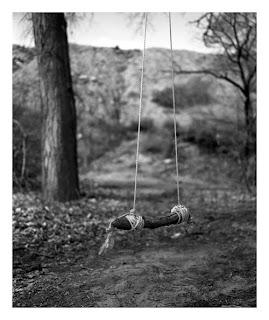 Once again, I am thrilled to announce the latest issue of Fraction Magazine.

Thank you to Jessica Todd Harper, Emily Shur, Tom Leininger, Dalton Rooney, and William Greiner for being a part of Fraction.

Also a big thanks to Larissa Leclair for the Emily Shur interview and to Mary Goodwin for the show review.