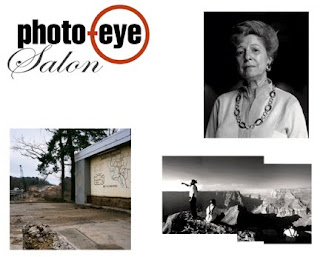 First Wednesday's September Salon will be held on September 1st, 2010, with the opening reception starting at 6:30pm and the salon running from 6:45pm to 9pm. Photographers Gay Block, Krista Elrick and Will Wilson will be presenting work. Block will be presenting her 30-year photographic and video portrait of her mother, titled Bertha Alyce: Mother exPosed. Photographing along the same path of Audubon, Elrick will show her work of migrating birds in the watersheds where Audubon hunted and painted. Wilson will present his work titled Auto Immune Response about the quixotic relationship between a post-apocalyptic Diné (Navajo) man and the devastatingly beautiful, but toxic environment he inhabits.
at 11:43 AM No comments:

Leica has been in touch with the British Journal of Photography.  When asked by BJP to clarify the situation, Leica says that it "has not stopped producing its analogue camera models, the Leica M7 and Leica MP, nor does it currently have any intention to do so."

I say hogwash, but I have a few questions I need to throw out there.

First, if Leica Camera AG owner Andreas Kaufmann really did say "Leica Camera has already ceased production of film cameras" on May 30, why was it not reported by the Japanese press until August 23?

Second, if Mr. Kaufmann really did say this, then why is Leica the company now saying something different?

Third, how come there has not been a denial from Dr. Kaufmann or a retraction / correction by Asahi Camera (as suggested by Mike Johnston)?

I can't answer any of these questions but in light of certain economic conditions and the fact that the M9 (digital) is sold out everywhere and brand new M7's (film) are easily found, I gotta believe that Leica is dedicating all of their efforts towards the digital camera.

And if I can speculate a bit, I will bet that Leica kills off their regular M film cameras (not their Ala Carte options) within three years.
at 12:04 AM 1 comment:

Email ThisBlogThis!Share to TwitterShare to FacebookShare to Pinterest
Labels: leica

Selections for the Photo Media Center

I just completed my selections for the show that I juried for the Photo Media Center.  I lived with the selections for about a week and I am confident that this is a very good show.

Thanks to everyone who entered and congrats to all those selected.

And a sincere thank you to Eric asking me to do this.

Watch for the show announcement in the near future

http://photomediacenter.org/
at 4:57 PM No comments:

Leica kills the M7 and MP (or Leica kills off the film camera) -
Can't believe it.

Email ThisBlogThis!Share to TwitterShare to FacebookShare to Pinterest
Labels: leica

There are some rather interesting thoughts and comments about HDR photography on the Fraction Magazine Facebook page.  Check it out http://ow.ly/2sfII

Feel free to add your thoughts there or here.

The original question was:

Email ThisBlogThis!Share to TwitterShare to FacebookShare to Pinterest
Labels: hdr

Hey Y'all,
Check this out:

The Texas Photographic Society is hosting an online exhibit with Fraction Magazine. Juror and Fraction Magazine Editor and Cofounder, David Bram, will select images that he would like to represent in an issue of Fraction Magazine. First, Second, Third Place and Honorable Mentions will be featured in the January 2011 issue. TPS is inviting amateur and professional photographers to submit digital files of their color and black & white works to TPS by October 13 for Best Shot online competition. The Best Shot will also be exhibited on our Members' Online Gallery for a month and archived for a year.

Go to http://texasphoto.org/GalleryFraction.html for details
Deadline is October 13
at 5:42 PM No comments:

Email ThisBlogThis!Share to TwitterShare to FacebookShare to Pinterest
Labels: tps

YOU GUESS IT! is a little game that the folks over at Luceo Images like to play.  Each week a theme is picked and then you try to guess it.

I was asked to picked this week's theme.  So, you guess it.

Email ThisBlogThis!Share to TwitterShare to FacebookShare to Pinterest
Labels: luceo

Flight at the Vermont Photo Workplace

The show "Flight" that I curated for the Vermont Photo Workplace is now online and hanging in the gallery. Click here for installation shots.
at 12:47 PM No comments:

I forgot how cluttered my desk was/is.  I have a fair amount of work for the new issue of Fraction, Number 18.  Fraction will be showing some work that it normally does not show.  Plus a new feature will kick off on September 1.

Thank you so very much to Amy Elkins, Daniel Shea, Phil Underdown, Tabitha Soren, Tom Griscom, Susan Burnstine and Tom Leininger.
Check it out now at http://www.fractionmagazine.com/
at 6:48 AM 4 comments: