I have been asked to be the Juror for the New Directions 2011 show at the Wallspace Gallery in Santa Barbara CA.  Here's a bit of info:

General Information
The submission period for our fifth annual juried show - New Directions 2011 will be open until 20 November 2010.
New Directions seeks to discover new talent in the world of photography. Past shows have included the works of Joseph O. Holmes, Priya Kambli and Joelle Jensen. Each year emerging artists have an opportunity to have their work seen by a nationally recognized figure in the field of photography. From these entries a cohesive show emerges for display at Wall Space in January, and this year we are excited to the opportunity to show ND11 in our gallery in Santa Barbara and Seattle.
All submissions for this exhibition are considered for gallery representation. wall space directors and associates will review the work, however the galleries review will not affect the outcome of the selection process.

Juror
David Bram is a fine art photographer and the editor, founder, and curator of Fraction Magazine, an online venue dedicated to fine art photography, showcasing the work of both emerging and very established fine art photographers. Fraction Magazine is now published on a monthly basis. Fraction Magazine was founded in 2008 and is currently on it's nineteenth issue and has shown portfolios from more than 120 photographers.
David has been reviewing portfolios at various events including Review LA, Review Santa Fe, PhotoNOLA, Atlanta Celebrates Photography and Fotofest. He was also a juror for Review Santa Fe in 2010 as well as a juror for Critical Mass in 2009 and 2010. In September 2010, David was the recipient of the Griffin Museum of Photography's Rising Star Award.

Prospectus for New Directions 2011
The Portrait: "Moments of Being"
As photographers, we look for faces and expressions that tell stories. We look for character. We look for emotion.
We look for the hook, that moment of being that creates a compelling portrait. Like a modern physiognomy, a portrait tells a story equal parts subject and photographer in a single moment.
As the curator of this show, I will be looking for portraits that are edgy and daring. I want more than the traditional head shot. I want to see work that pushes the boundaries of what is normally called a portrait. (Please note: For this show, my interests are not in photo-journalistic photographs of the homeless, the needy, or third world subjects)
Photographs by Emmet Gowin and Sally Mann (for example) show a trust and a relationship between the photographer and the subject. There is a connection that is clear to the viewer; this is what I am looking for. I will also be looking for unique styles and interesting compositions. The images might be quiet, honest, sexually charged, or pure. These portraits, color or black and white, should convey a unique and powerful moment of life.
For more information please contact the gallery.

For the rules and entry links, visit the Wallspace website

Email ThisBlogThis!Share to TwitterShare to FacebookShare to Pinterest
Labels: wallspace

The State of Ata - Mike Mandel and Chantal Zakari

Lecture at UNM on Wednesday October 6 at 530pm 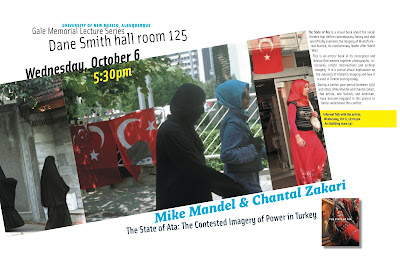 Email ThisBlogThis!Share to TwitterShare to FacebookShare to Pinterest
Labels: state of ata

The underpants you know you're gonna buy
http://ow.ly/2M52z 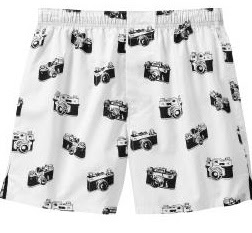 John Mann, who was featured in Issue 3 has a new and very limited book available, called Thinner Air.

John was one of my teachers at UNM and is a great friend.  I know how meticulous he is about his work and his printing so I am quite sure this is a terrific little book.

Moments of Being - A portrait show at the Wallspace Gallery

I am so very excited to be judging a portrait show for the Wallspace Gallery in Santa Barbara CA.  When Crista Dix asked if I would do it, I think I said yes before she was even done speaking.

Some details:
You can submit from October 1 to November 20.

The rest are here or feel free to contact me directly (fractionmag@gmail.com)
http://wall-spacegallery.com/newDirections/
at 4:21 PM No comments:

Going to the Griffin

In a few short hours, I leave for the Boston.  I will be receiving the Rising Star award from the Griffin Museum tomorrow night.  It is being presented to me by Mary Virginia Swanson.  Both are unbelievable to me.

Unfortunately, I have to leave my two girls behind.  And after yesterday's event, I am really sad.

If you will be at the Griffin tomorrow, please make sure to say hello.  I'm sure it's going to be a great night.
at 9:31 AM No comments:

Email ThisBlogThis!Share to TwitterShare to FacebookShare to Pinterest
Labels: griffin

The most modern camera

You will want this camera 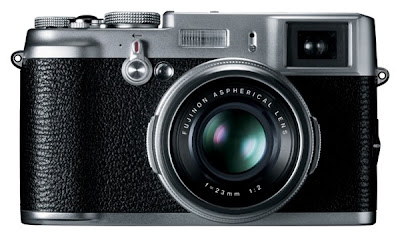 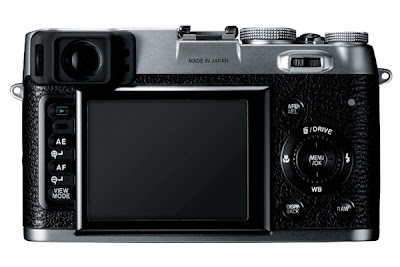 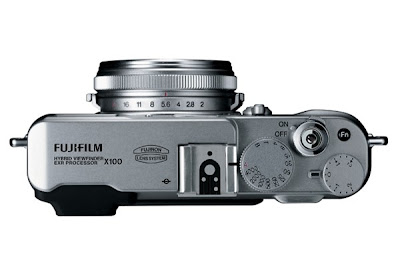 Fraction Magazine is teaming up with photographer Raymond Meeks to kick of the new Fraction Fund, financial assistance for photographers with incomplete photographic projects.
The concept is this:
Ray has just recently announced "who will stay", the third and final segment of personal journals/artist books, which began with "carousel" and "amwell, continuum".  Together with Fraction, Ray will be offering a limited edition of 50 books which include an original print, signed and editioned.
When the edition sells out, 20 percent of the sale price (approx. $1000), will go towards the Fraction Fund.
We will then do an announcement and a "Call for Submissions".  This will be free to enter.  The photographer will be required to send links (not physical prints, please) and a brief statement about the work and why the funds are needed.  (you do not need to buy the book to enter. you must have a personal website; not flickr, facebook, deviatart, etc).
The winner be selected by David Bram, awarded approximately $1000 and will be included in an issue of Fraction Magazine.
WATCH THIS SPACE FOR THE OFFICIAL KICK OFF IN JANUARY
Info about the book:
Go to http://www.raymondmeeks.net/Login.cfm and enter "friend" at the login
The print that will be included is 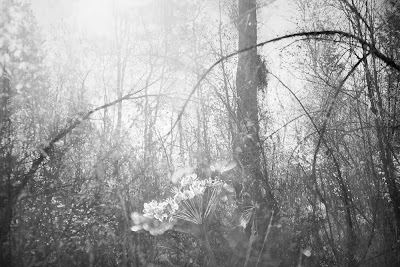 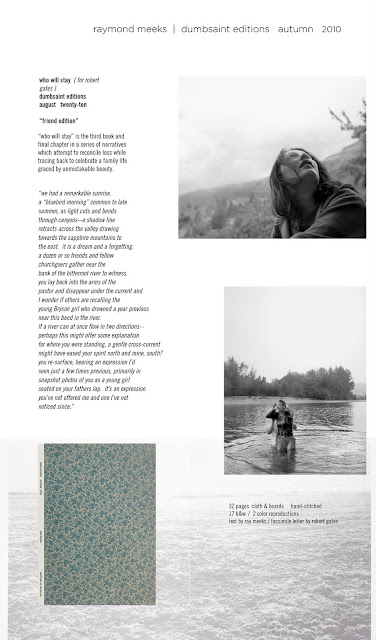 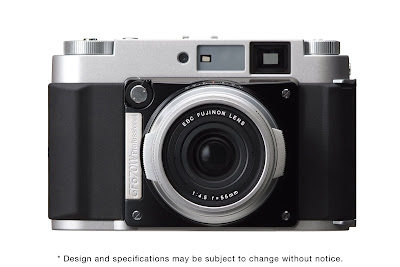 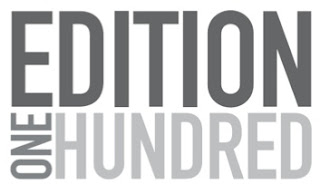 Edition One Hundred and A&I Lab are pleased to announce the premiere Los Angeles exhibition of work from EDITION ONE HUNDRED www.editiononehundred.com

On Saturday, October 2, A&I Lab, Los Angeles, will host the first exhibition of work by all 2010 Edition One Hundred artists. The exhibition is designed to introduce the public to the brand by showcasing the luxurious production and knock out content of astoundingly affordable art. Edition One Hundred has partnered with A&I Lab, the largest photographic and digital services lab on the west coast, to produce the photo-based fine art prints available for sale. Prints that are not photo based are made in collaboration with master printer and artist Richard Duardo at Modern Multiples in Los Angeles. All works in the exhibition will be available for purchase at A&I Lab on the evening of October 2. For those who cannot make it to the opening, prints are available for sale exclusively at www.editiononehundred.com.

Launched in June 2010 by Cat Jimenez, Edition One Hundred is a gallery without walls, open twenty-four hours a day in any time zone around the globe at www.editiononehundred.com. Every two months, Edition One Hundred hosts a brand new curated exhibition of work featuring up to eight artists of international renown and emerging talent. The exhibition at A&I Lab highlights the first three shows: I LOVE LA, FREEDOM & REVOLUTION, and DELAYED GRATIFICATION (which debuts online on November 3).

Each artist’s work is printed in an exclusive edition of 100. With rare exceptions, each print sells for $100. All prints are signed by the artist, come with a certificate of authenticity. Edition One Hundred will contribute 10% from the sale of every print to the charity or cause of each artist’s choosing.
The exhibition at A&I Lab is designed to provide the public with the opportunity to preview the works in person, revealing the high production quality of each print. While most gallery exhibitions offer high priced work in a rarified setting, this show introduces accessible art to new collectors, providing fine art prints by high profile contemporary artists at a price within any budget.

Founder Cat Jimenez observes, “As more people begin to understand that art, and great art at that, can be accessible, I hope they'll consider supporting more artists, not just those that are championed by the art world. And if we're fortunate at EOH, we'll get some of that talent out there that has been embraced by the art world because they are at the end of the day, free thinkers that believe art is just as much for the masses as it is for the wealthy.”


For more information, please contact Sara Rosen, sara@missrosen.us
at 11:34 AM No comments:

Email ThisBlogThis!Share to TwitterShare to FacebookShare to Pinterest
Labels: edition one hundred

The Clarence John Laughlin Award was created by the New Orleans Photo Alliance to support the work of photographers who use the medium as a means of creative expression. The award grants one $5000 prize annually to a fine art photographer who is creating or has completed a significant body of photographic work. John Wood, Editor of 21st Editions, is the inaugural juror.

This new award is open to emerging and established photographers who reside in the U.S. The online application process requires a portfolio of 10-20 photographs, a written statement, a bio or CV, and a $25 application fee. The application deadline is September 15, 2010. Only one recipient will be selected to receive the $5,000 award.

Apply here: http://www.neworleansphotoalliance.org/CFE/ET.php?cID=166
at 8:49 AM No comments:

Email ThisBlogThis!Share to TwitterShare to FacebookShare to Pinterest
Labels: photonola

I am looking for female photographers who work with the nude figure, male or female.  Must have a solid portfolio and a website, and must be contemporary.  Send links to fractionsubmissions@gmail.com
at 6:37 PM No comments:

Email ThisBlogThis!Share to TwitterShare to FacebookShare to Pinterest
Labels: call for work

Issue 18 is now online and available for viewing.

This issue features the work of Jason Houston, Heather McClintock, Gloria Baker Feinstein, and David Rochkind.   There are book reviews by Michele Penhall and Ellen Wallenstein.

So check it all out at http://www.fractionmagazine.com/
at 9:05 AM No comments: