The Roundtable Review is an opportunity for fine art photographers to present their portfolio to a panel of three reviewers at one time. This format allows for more dialog and problem solving about the work, as each reviewer brings a different perspective and different ideas.

The Roundtable Review is a juried review, and ten photographers will be chosen to participate. Each participant will have a 30-minute session with the three panelists and receive feedback on their work.

At the end of the one-day event, participants will socialize and network with the panelists and fellow reviewees at an evening cocktail party at the Rayko Photo Center. The wrap-up party gives participants an opportunity to continue conversations from their review, as well as show and share their portfolios with the other reviewees.

Details at http://www.roundtablereview.net/
at 10:47 AM No comments:

Email ThisBlogThis!Share to TwitterShare to FacebookShare to Pinterest
Labels: roundtable


STUCK from Joe Ayala on Vimeo.

And the interview of the photographers here.
at 12:43 AM No comments:

Thinking about a new camera bag?

I recommend the @thinkTANKphoto Retrospective 10 -

Coming of age as a photographer during the 1970’s and ‘80’s, I shot 35mm film --- like most enthusiasts of limited means --- and developed it in my makeshift bathroom darkroom. But when I resumed “serious” photography around 2004, after a several-year hiatus, I first did so with a family hand-me-down Kowa Super 66. As stolid and no-frills as that camera was, one look at those medium-format negatives told me I’d found my format. Medium format seemed to best fit the way I see, think, and shoot. And a gorgeous, sharp, tone-rich negative shot on 120 color film became my archetype of a beautiful image.

Several years, and tens of thousands of photographs later, I find that I’ve produced probably two thirds of my archive with medium-format cameras of several different brands and formats. The remainder I’ve shot mostly with the handful of digital cameras I’ve also owned --- all of which I’ve since sold or put aside. In fact, until last fall, I had all but stopped shooting digital. I found a more welcoming home for a D300 that had languished in its bag untouched for a year, during which I shot some 150-plus rolls of 120 film.

There was nothing at all wrong with the Nikon’s images --- other than the 1:1.5 image ratio that I always seemed to want to crop at least to 4:3. In retrospect, I think my dissatisfaction with digital photography simply boiled down to a few non-rational objections that logical argument couldn’t overcome.

First, the pictures, while good-looking in their own right, didn’t match my film-centric mental template of a “good” photograph --- my jaw didn’t drop, Mamiya-7-on-Portra style, on viewing the output of my DSLR. I’m not talking about “native” vs. “scanned” pixels, linear resolution, or any other pocket-protector stuff. I’m simply talking “wow” factor. Digital, it seemed, promised “new” and “better”, but delivered only “good” and “different”. It felt like opening a damaged toy on Christmas morning.

Second, after almost four decades of shooting film, some part of my reptilian lower brain felt that “real” photographers use only manual cameras, and set apertures and shutter speeds on rings and dials which click satisfyingly into place. We do not whirl girly wheels with our thumbs; we disdain the siren song of matrix metering as fit only for Digi-Chimping Shutter Monkeys. Our exposure numbers are obtained from handheld meters, wielded by a Skilled Craftsman who must interpret the meter’s advice against lighting conditions at the scene. Compared to this intricate mechanical kabuki, shooting with a DSLR felt at times like operating a microwave oven or TV remote control.

And, finally, there is the matter of the cameras themselves. Compared to the unapologetically-utilitarian squareness of a Mamiya 7, the haughty chrome elegance of a Hasselblad, or the ergonomic flair of a Contax 645, modern DSLR’s can seem downright homely. As I touched on in last month’s column (here or here), one must give due deference to his inner Collector, and modern DSLR’s move him not at all.

All that said, I started shooting digital again last fall. The event that precipitated this reconsideration was returning from a family vacation with 20 rolls of 120 color neg film to deal with. Doesn’t sound like such a big deal, right? Processing it in my Jobo took only a few hours, but getting it scanned, corrected, and spotted took me several weeks, working in small chunks of time here and there around my other obligations. It breaks my heart to say it, but that’s increasingly time I find I can’t spare from the other stuff, and tedium I don’t wish to endure.

Furthermore, despite the fact that color films are better today than they’ve ever been, the only sure prediction one can make about them is that they are history --- in 3-5 years if you’re pessimistic, 10 if not. Besides, I have no idea how much longer I’ll be able to affordably source the C-41 chemistry required to feed the Jobo. I can make my own B&W developer from cheap, plentiful chemicals, but C-41 is another story. When that goes, or the Jobo dies, and I have to start sending 120 color-neg off to the west coast at $8 a roll and two weeks’ turnaround, I’m probably done. The wait alone would kill me!

The other thing that’s changed is that I have cleaned out my gear closet, consolidated things a bit, and settled on a workable digital solution whose images, so far, I have found as satisfying in their way as my beloved MF film pictures. They are not the same, of course, but they are beautiful. I may have more to say about this in some future slow-news month when I feel like a gear review. I really don’t want this column to be about gear --- except as it relates to the overall culture of image-making. So stay tuned.

I plan to keep on shooting film until something breaks irretrievably. I’m addicted, and just because I’ve added another drug to the pharmacopoeia doesn’t mean that I can’t stay high on the old standbys. Some days, you just gotta have a mechanical shutter ca-chunk to get through the day.
at 11:40 AM 5 comments:

Order the camera here
at 1:26 AM No comments:

Since Fotofest 2010 (April), I've been opening a bottle of Jack Daniels at the end of the reviews.  And yes, lots of people come over to enjoy a shot. 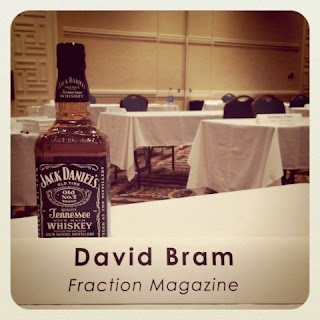 Issue 27 is Not Safe For Work


It also features a review of the Fujifilm X100 digital camera by Camden Hardy.


Check it out and tell your friends


http://www.fractionmagazine.com/
at 1:17 AM No comments: